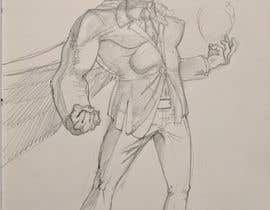 I am writing a book that will incorporate super hero's and villains. I have a total of 10 characters that need to be designed but this contest if for only one of those characters. However, I am also looking for the person who can design the whole set of superhero's and villains so its important to me that a good job is done on this one.

So lets focus on the first Superhero: I don't really have a name for him but I believe its going to be "Being". He is the leader of the Superhero's and the most powerful. I need his presence to be commanding and indicative of a leader. He is a black man with a low cut, muscular but not a bodybuilder type of muscular. I'd like the guy to resemble me but not too too much. A superhero version of me I guess is the better way to say it. 1) The first outfit is a black and white suit with a white shirt and gold tie. He also has a gold flowing cape. 2) The second iteration of this suit is a white suit with a gold tie and gold cape. The black guy in the photos below are pictures of me. The White guy is an example of the white suit combinations you can employ in your drawings.

* Just added a cartoon character to show the type of drawing I am looking for .

“CipherStudios did a really really great job on this design. I couldn't be more pleaseds”